Elsewhere in Sweden there were as many firetowers as in Dalarna. Exactly how many are not known, but it may have been between 40 and 50. The firetowers and the modern forest fireprotection occurred in northern Dalarna in the late 1800s. Then the forest became an economic value of completely different dimensions than before. At the same time, several years of dry weather started large forest fires. In order to better protect themselves from the fires, the new large forest owners began to arrange surveillance from mountainpeaks to detect forest fires earlier. It was initially used to use large pines as observation sites.

Then the first firetower emerged in Orsa 1889 and soon Älvdalen followed. Several firetowers were equipped with telephone connections early on and, as more firetowers were built, a telephone network was expanded in the Swedish woodlands.

The firetower also became an early tourist destination. In fact, the firetower had dual functions. First, the tower was a sign that the forest had a financial value and the tower was part of the defense of this value. Second, it was a symbolic and cultural value of the country. In that context, the tower would serve as a outlooktower where the visitor would look out over his country and discover it and get to know it. Many travel stories tell you about visits to the firetower and about the prospect of the landscape.

Although the building of firetowers spread outside Dalarna, the rate of expansion was slow. By the late 1930s, several large forest companies and other organizations began building a firetower system that would cover all of Sweden's forest areas. New and more uniform tower of iron became common. In connection with the outbreak of war, the state took over the project to accelerate its expansion. One feared that war crimes over Sweden risked to start fires in the forest. In 1942 there were almost 300 towers in the so-called national network, of which 34 were in Dalarna. After the war, surveillance in the national network continued until the 1960s when the firefly was organized. After that, many towers were abandoned. Those who remains are telling a strange story about the emergence of a system for discovering and defending the assets of the Swedish national state - their own country and the forest.

The firetower in Kullen

The highest peak (396 meters) of Kullberget has always been a great viewpoint. Here before, at Valborg a fire was lit, and it could be seen far away. In the beginning of the 1940s, the forest companies, including Billerud, who owned a lot of forest, began to build a fire protection system. The guard tower was built in high places around in the forests, and what fit better than the peak of Kullberget?

At the farm of Slaktar-August Andersson in Kullen there was a stand from a windgenerator that could be used. This stand was originally 17 meters high, but the top was removed and the rack was moved to the top of Kullberget. Billerud now employed special firewatchers for daytime spanning over the area. If they saw any smoke evolution, the had to run down a few hundred meters to the forest guard farm (now Mieps huset) and call for help. A common cause of fire was sparking from the trains.

In 1959 the woodwork was replaced because it was quite rotten. The need for a fire tower, however, decreased rapidly as the aeroplanes were used for inspection instead, and around 1960 the era was over. Nyhammar's UFO Association used for a number of years around 1980 the tower for its tensions and they replaced the woods on the upper floors.

The tower then proceeded to decay, and because the forest around it becames higher the view also decreased. A long-term sleep leaked over the place, but when the forest around the top of the mountainpeak was harvested a few years ago, the view returned. The villagers rediscovered their "tower", and with contributions from the King Gustav VI Adolf Foundation, the foundation for Swedish culture, the tower has now been renovated.

Slaktar-August Andersson was a technical inventor in Kullen. In the 1930s, no electricity was yet available to the village, but there were other sources of energy. August then produced a wind turbine that stood at his farm in the eastern part of the village (current Kullfallsvägen). The tower was 17 meters high.

The power plant provided the farm with electricity until the village in 1945 was connected to the public electricity grid. The stand was then unnecessary and taken down. The upper part was removed and the rest moved to the peak of Kullberget and became the village's fire tower. 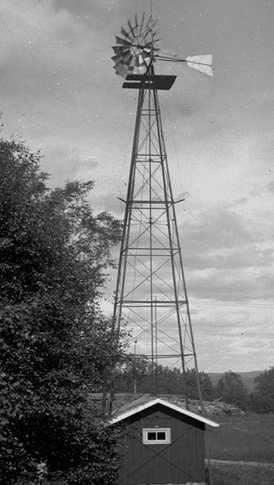